$400 spa on board ship credit - An Olsen-O'leary Travels Exclusive! 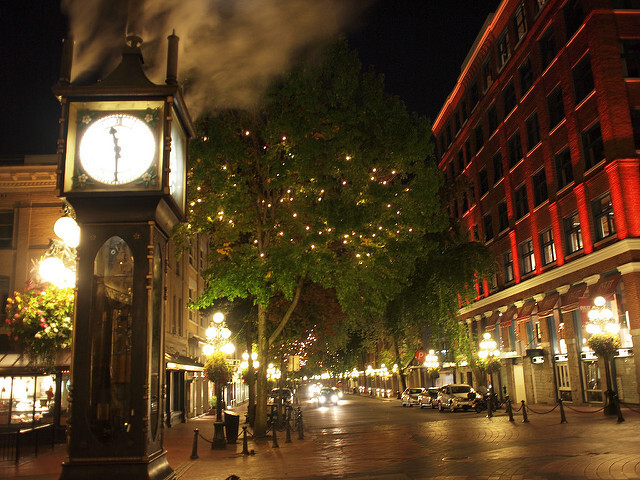 “Gassy Jack” Deighton saw a chance to make money from the miners on their way to the Yukon and the saloon he built became the focus of the shanty town known as Gas Town. From here, modern Vancouver was born - Canada’s third largest city. The government persuaded the settlers to change the name of the town to Vancouver, after Captain George Vancouver, who sailed the area’s waters in 1792. Today Vancouver offers travelers tram rides to the top of Grouse Mountain, the lovely Ming Dynasty Gardens, historic Gas Town and picturesque Stanley Park.

"Steam Clock in Gas Town" by Hisakazu Watanabe, Flickr.com is licensed under CC BY 2.0 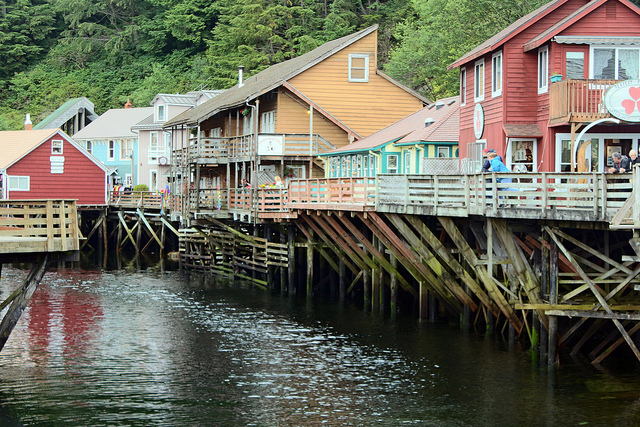 Ketchikan, on the southwest side of Revillagigedo Island, grew up around salmon canneries and sawmills. Ketchikan's name supposedly comes from the native term "Katch Kanna", which roughly translates: "spread wings of a thundering eagle." At one time Ketchikan was proclaimed the “Salmon Capital of the World.” An outstanding collection of totem poles make a visit to Ketchikan essential for anyone interested in Native art. Travelers flock to Ketchikan for their first look at the North Country,and are rarely disappointed.

"Creek Street in Ketchikan, Alaska." by mark byzewski, Flickr.com is licensed under CC BY 2.0 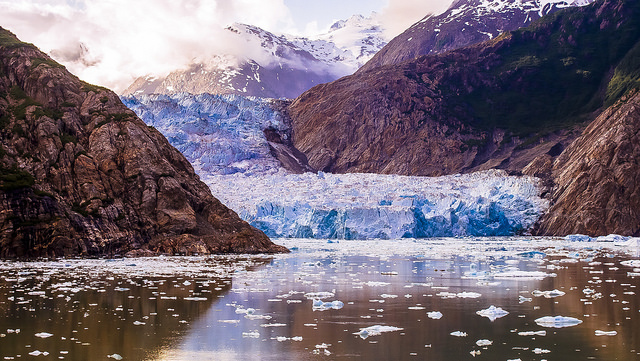 This stupendous fjord is part of the 30 mile long Tracy Arm - Fords Terror Wilderness region -- located about 60 miles southeast of Juneau. Tracy Arm charms the traveler with snow capped peaks, shear rock palisades, waterfalls, rainbows and massive tidewater glaciers. Drift among the icebergs for close-up view of Sawyer Glaciers, gleaming subtle shades of blue under a glorious expansive sky. Be sure to watch for seals and whales frolicking among the clear, cerulean waters.

"Sawyer Glacier - Alaska" by Ian D. Keating, Flickr.com is licensed under CC BY 2.0 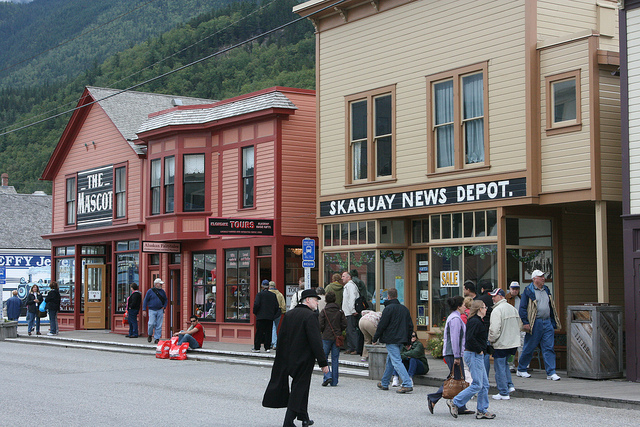 Skagua, as it is known by the Tlingit, means” windy place.” Skagway, a place of many names, and much history is the northern terminus of the Alaska Marine Highway. It was known to thousands of hopeful gold rushers as the gateway to the gold fields. Skagway retains the flavor of the gold rush era and the character of such colorful inhabitants as Soapy Smith “King of the Frontier Con Men”; especially on Broadway, with its false-front buildings, and in the Trail of ‘98 Museum, with its outstanding collection of gold fever memorabilia.

"Alaska Cruise" by Roger Mommaerts, Flickr.com is licensed under CC BY 2.0 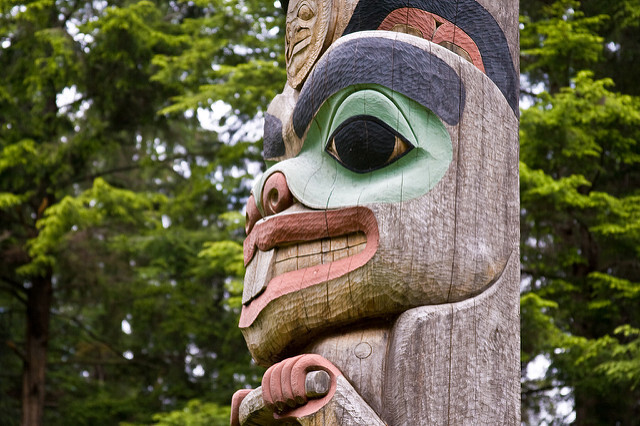 Founded by Russian fur traders as New Archangel in 1799, Sitka was the historic center of Russia’s Alaskan empire. The Russian flag was replaced by the Stars and Stripes when the United States purchased the Alaska territory in 1867. Today, picturesque Sitka, is known for its fishing industry, an annual summer classical music festival and, of course, its many historic visitor attractions. On a clear day Sitka, the only city in southeast Alaskathat actually fronts the Pacific Ocean, rivals Juneau for the sheer beauty of its surroundings.

"Totem" by Andrew Malone, Flickr.com is licensed under CC BY 2.0 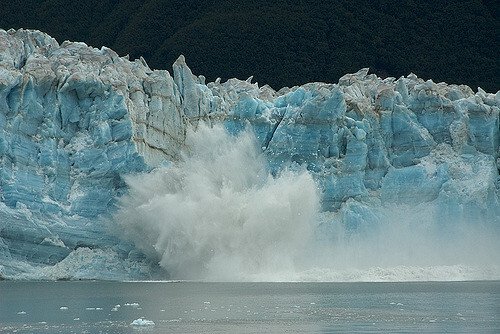 Hubbard Glacier is the largest calving glacier on the North American continent. The glacier routinely calves off icebergs as high as 10-story buildings, sending massive blocks of ice into the sea every few minutes.

"Hubbard Glacier Calving" by Kyle West, Flickr.com is licensed under CC BY 2.0

August 2 Anchorage (Seward)
Seward was originally founded in 1903 as the southern terminus for the Alaska Railroad, a distinction it still holds today. The picturesque harbor with its colorful wood-frame houses and background of soaring cliffs looks out on Resurrection Bay, so named by a band of Russians explorers who found this calm spot along the storm-tossed Gulf of Alaska on Easter Sunday. From downtown Anchorage you can view two active volcanoes, the highest point on the continent of North America (Mount McKinley), and six major mountain ranges.

Hero Image attribution: "Spring time in Alaska" by capt_tain Tom, Flickr.com is licensed under CC BY 2.0

You will visit the following 3 places:

Anchorage (officially called the Municipality of Anchorage) is a unified home rule municipality in the U.S. state of Alaska. With an estimated 300,950 residents in 2013, it is Alaska's most populous city and contains more than 40 percent of the state's total population; among the 50 states, only New York has a higher percentage of residents who live in its most populous city. Located in the south-central portion of Alaska at the terminus of the Cook Inlet on a peninsula, Anchorage is a common refueling stop for many international passenger flights and is home to a major FedEx Hub which the company calls a "critical part" of its global network of services. Anchorage has been named an All-America City four times, in 1956, 1965, 1984–85, and 2002, by the National Civic League. It has also been named by Kiplinger as the most tax-friendly city in the United States. It's also known for its cultural sites, including the Alaska Native Heritage Center, which displays traditional crafts, stages dances and presents replicas of dwellings from the area’s indigenous groups.

Ketchikan is an Alaskan city facing the Inside Passage, a popular cruise route along the state's southeastern coast. The city is named after Ketchikan Creek, which flows through the town, emptying into the Tongass Narrows a short distance southeast of its downtown. Civic boosters have dubbed the community the "Salmon Capital of the World". The Misty Fiords National Monument is one of the area's major attractions, and the Tongass National Forest has long been headquartered in Ketchikan, mostly in the city's historic Federal Building.