Whether you’re a duffer or a master, you need to tee up at these picks. Championship courses, clifftop holes, oceanfront fairways, and mountainside ranges? You’ll find them here on our list of staff and traveler favorites. Plus, there is plenty to do for the rest of your crew if you want to make it a couples or family affair!

Golf, eh? Our neighbors north show they know a thing or two about it!

Desert or tropical island courses not for you? Then head for something bigger than the hills—the Canadian Rockies. In Alberta, the Fairmont Banff Springs provides alpine views and mountainous optical illusions that make focusing on your swing an even greater feat of discipline. Challenging layouts are found on both the Stanley Thompson Course—designed by the man himself—and the Tunnel Mountain Course.

Thompson's 18 holes with a par 71 opens every May for play through October, as does the shorter Tunnel Mountain. That executive course was designed by Cornish and Robinson, measuring 3,287 yards and coming in at par 36. On–site teaching professionals offering private, semi–private, group, and customized lessons can put the odds of coming in below those numbers in your favor. 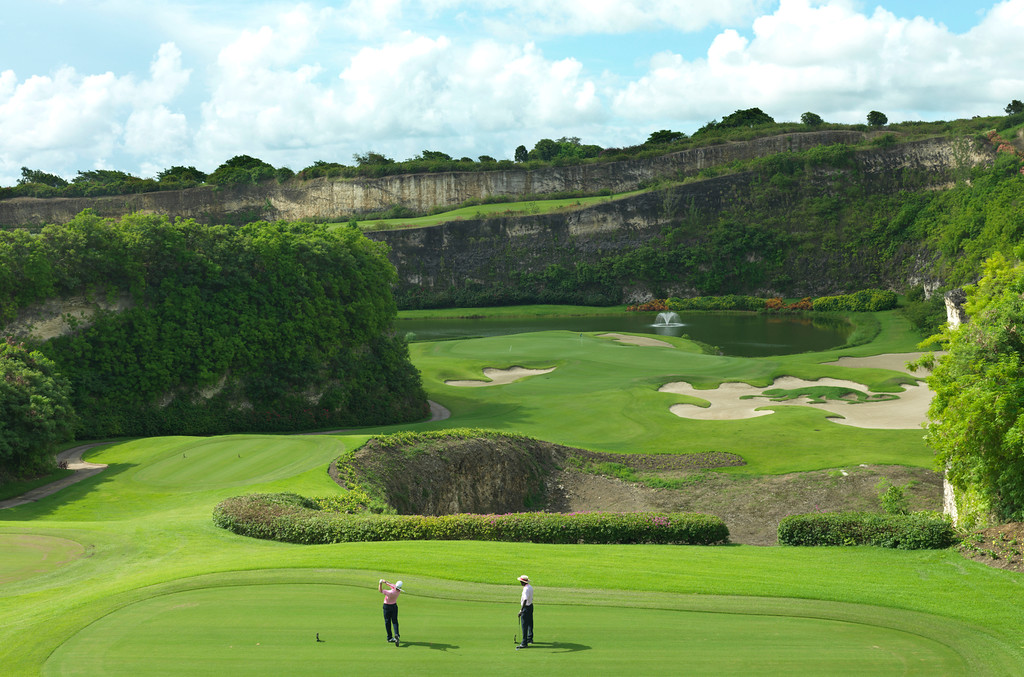 Cricket’s the name of the game on this island, but the grass is greener on the green.

Yes, this English–influenced island's national sport is cricket, but that doesn't stop golf from making its mark. By tapping into golf great Tom Fazio for this luxury golf retreat, Sandy Lane ensures it. In an old limestone quarry is The Green Monkey, where a full 18 holes on its 72–par, 7,343–yard course runs $390 a round. Its tremendous elevation change is a large part of why this course is a can't–miss, along with perks like a GPS system that advises you on each hole and can be used to order light refreshments—much like having a second caddy.

Along those lines, Fazio's The Country Club, where the 2006 World Golf Championships Barbados World Cup took place, also offers a 72–par challenge over 7,060 yards above the Caribbean Sea, but for a fraction of the cost. And The Old Nine, an executive course that dates back to 1961, is even more affordable, meandering scenically through the Sandy Lane estate for a more leisurely round.

At this pineapple plantation, you’ll be puttin’ on the Ritz.

Two courses find plenty of room on the 22,000 acres of this historic pineapple plantation in Kapalua. Its opening act is The Bay Course, designed by Arnold Palmer himself and Francis Duane, featuring Maui's only oceanside hole and fantastic views of neighboring islands on 16 out of its full 18. Host to over 20 professional tournaments, it's a testament to the grandeur of The Plantation Course that The Bay comes in only second.

The signature Plantation Course was designed by Ben Crenshaw and Bill Coore and opens the PGA Tour's Sentry Tournament of Champions each year. Stunning ocean views and those of nearby islands are only part of what makes this 7,263–yard course the leading one in Hawaii and among Top 100 across America (according to Golf Digest). To master this, consider starting at the Kapalua Golf Academy on site, with short–game practice areas, an 18–hole putting course, and plenty of clinics.

No matter how many courses he develops, it seems that PGA legend Greg Norman has no end of new ideas. At the spectacular El Camaleón course, he not only manages to marry signature landscape elements of the Mayakoba with traditional features—sand, water, greenery—but tames them into elegance with distinctive vision. The sand here comes in the form of dunes, and mangroves provide the foliage. Four cenotes come into play; they're only some of the ways water features at 15 of the 18 holes. It should come as no surprise, then, that this course was chosen as the site of Mexico's only PGA Tour event, the OHL Classic at Mayakoba.

That's not the only first attributed to this development. The lone Jim McLean School of Golf is also here. Featuring a two–bay SuperStation and the Pure Performance Golf Lab, your best game might be a stay at the Banyan Tree away. Not only does the school offer coaching, the lab, and technology like the Trackman swing and ball flight analysis system, but they can also fit or build your perfect custom clubs.

Links or parkland? Why not both?

Arnold Palmer is more than just a refreshing drink—for those who like to hit the greens, you know he's a golfer so revered for his over 60–year run that he was among the 13 original inductees into the World Golf Hall of Fame and is considered one of the sport's greatest of all time. With that in mind, it's no wonder his K Club designs, The Ryder Cup Course and The Smurfit Course, make it to our Top Ten list. Palmer shows mastery of both parkland and links courses at this one single property, making it a definite "do" for golfers.

The Ryder's Cup is challenging and dramatic, taking on a parkland style. Its layout has made it a repeat winner for top three in all of Ireland. On the other hand, The Smurfit Course is a challenging inland links course, with dune style mounding throughout the 200+ acres of carefully manicured lands. Play them both, as many of today's golf stars have, and see what type you prefer. Forget about grabbing the bull by its horns. Try the Teeth of the Dog.

Obviously, we couldn't put together a list like this without including the Caribbean's #1 golf resort. The three on–site courses at this sportsman's paradise were designed by Pete Dye, and all make the most of DR's coral shores, craggy hills, and ocean views. The names? Cliffside Dye Fore, The Links through Casa de Campo, and the lauded Teeth of the Dog, a masterpiece counted among the finest courses in the entire world and the best in the region.

Complimentary golf clinics every Wednesday and Saturday get you ready; kids 4 – 15 are encouraged to enroll in Junior Golf Academy, in session on Mondays and Wednesdays. Special packages—including villa stays for up to five or shooting combos—make it the perfect golf getaway.

Sightseeing at the tee.

Even those unfamiliar with the game will recognize the name Robert von Hagge, one of the most celebrated golf course architects of all time. His redesign of the Cinnamon Hill Golf Course—with Rick Baril—in 2001 brought the 1969 grounds to even greater glory, its 18 holes a frequent host for tournaments and competitions.

The Johnny Walker Cup takes place here, and World Golf Long Drive competitions and the LPGA Skills Challenge have as well. But teeing up on its 6,828 yards is more than just a championship challenge—you'll play before the historic Rose Hall Great House; the centuries–old burial plot of English poet Elizabeth Browning's family; a waterfall that was featured in the James Bond movie Live and Let Die; and the Cinnamon Great House, the second home of Johnny and June Carter Cash. 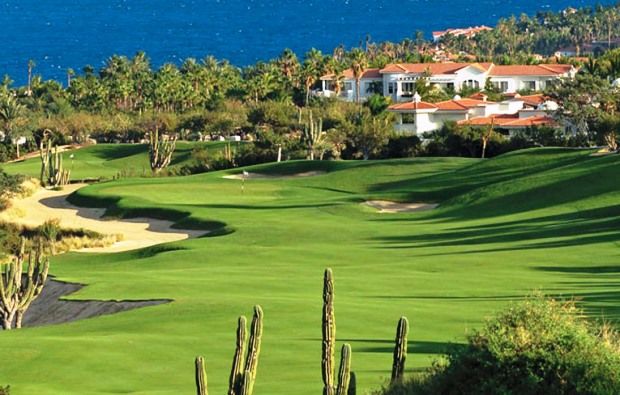 (via One & Only Resorts)

Play like an executive … then do it again twice more.

Even the world's greats have momentous firsts, and for the Golden Bear Jack Nicklaus, his course at Palmilla Golf Club was one of them. This was the very first Signature he built in Latin America, an exciting 72–par challenge consisting of three executive courses. Named Arroyo, Mountain, and Ocean, this 27–total hole amenity has been named the "Grand Dame of Los Cabos golf," with Sea of Cortez views from every one of them.

Warm up with golf lessons at the practice facility nearby or go straight for the shot fresh off your short ride from One & Only Palmilla. Once there, it's up to you which of five staggered tee boxes you want to make your handicap. However you play, though, know that you're at one of the top 100 courses in the world, according to Great Golf Resorts of the World.

Synonymous with golf, Scottsdale is no shirker.

Few cities in America can boast the kind of golfing opportunities Scottsdale does, making the competition fierce for the title of best in the region. We're partial to the Troon North Golf Club, whose two courses take pride in being "pure, desert, classic." Both take advantage of the natural ravines and foothills beneath Pinnacle Peak and both are the brainchildren of Tom Weiskopf.

Monument was a collaboration between the golfer and architect Jay Morrish, coming in at 7,039 yards; Pinnacle came six years later as a solo vision. With five sets of tees at all 36 holes, these par–72 and par–71 courses (respectively) let golfers choose their challenge. They can make their game as easy as the complimentary shuttle that the Four Seasons Resort Scottsdale provides or as tough as you want it to be in order to justify treating yourself to that special golfer's massage; it uses golf balls and stretching techniques to target areas specifically troublesome to this game's most avid players.

Forget executive … these are courses fit for a “prince.”

Sure, it's a liberty to say so based on geographic name alone, but when it's the first solo design from one of the most lauded scions of the golf world, Robert Trent Jones, Jr., there are various ways we can justify our caption! His 2010 redesign of the Makai course includes the lakes, cliffs, native woodlands, and Bali Hai and Hanalei Bay coasts, and introduced seashore paspalum turf grass, reconfigured greens complexes and surrounds, and reshaped bunkers.

All of these upgraded features have earned the par–72, 7,200–yard course a place on National Geographic Traveler's"Top 5 Great Golf Settings" in America, as well as one on the list of "Greatest Public Golf Courses" in the country, as ranked by Golf Digest. The executive 9–hole Woods Course complements Makai, as does a practice facility with two tees, fairway bunker, target greens, and other features. These are often used for golf clinics that include full swing, driving range, and short game. But it's important to remember that golf is a way to unwind … which is why they offer the Mahalo Mixer, a 30–minute clinic with three holes of golf, ending in a glass of prosecco as the sun sets.